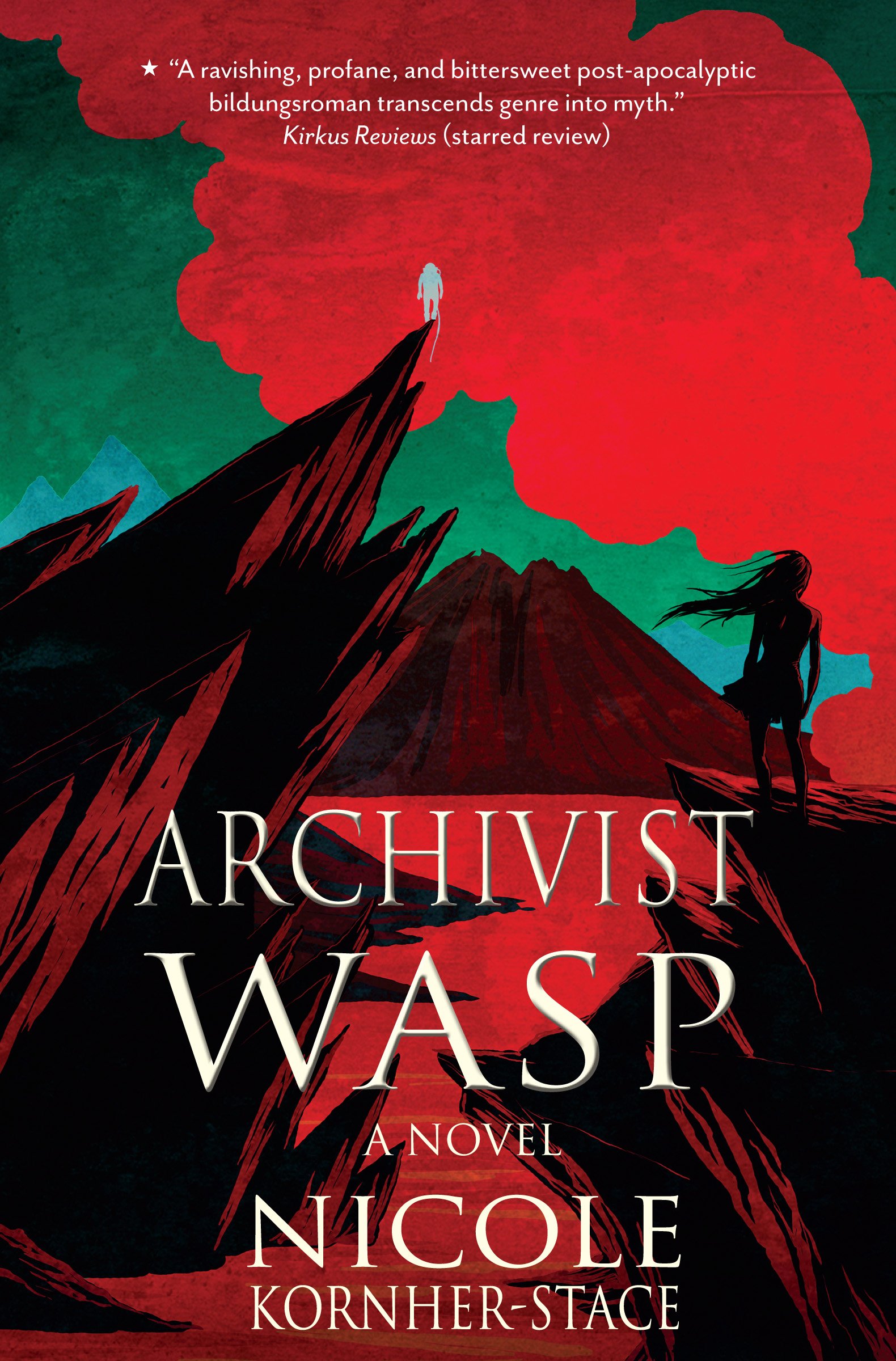 It was a decision she’d been making over and over for three years now, and she always reached the same conclusion. She hated being Archivist. Hated being forced to choose between killing upstarts to keep the sacred role she’d grown so tired of and letting herself be killed so that the upstart who killed her could take up that role when she was dead. But if there was one thing she was terrible at doing, it was giving up.

Archivist Wasp is a strange blend of post-apocalyptic dystopia, ghost hunting, and metaphysical descent into the underworld. My response on completing it can be summarized as “very weird, very good.” Although intriguing, philosophical YA is nothing new, Archivist Wasp takes this to a new level. Nicole Kornher-Stace crafts a world predicated not only on life and death, but also on the interconnectedness of life and our inability to define ourselves without using others as points of reference. None of us live in a vacuum, and the only way to grow and maintain our sense of self is through those we care for.

Set long after the apocalypse had rushed through and torn down the world as we know it, Archivist Wasp takes place in a rural town dominated by the local priest. The town is haunted by very real ghosts, who often cause trouble for its inhabitants. The Archivist, who exists under the control of the priest and is chosen by yearly combat trials to the death, handles the ghosts. Wasp, the current Archivist, wants to learn as much as she can from them. She knows very little of the history that led up to her present day, and by studying the ghosts she hopes to gain more insight about how their society formed. Unfortunately, most ghosts are either fully mute or only able to speak a few words on repeat. They are locked in the most intense moments of their lives, unable to escape. They are alone, abandoned, and silenced.

Wasp hates this system. She hates being forced to kill or be killed, and she hates the brutality she is forced to inflict on the ghosts themselves. With a few exceptions, the ghosts aren’t hurting anyone – they’re just annoying. When she has the chance, she chooses to release them rather than destroy them. Though she believes in their pantheon, Catchkeep being the patron saint of Archivist, she questions the specific implementation their priest encourages.

“I am the Archivist. Catchkeep’s emissary, ambassador, and avatar on earth. Her bones and stars my flesh; my flesh and bones Her stars. Mine is the mouth through which the dead world speaks. Mine are the hands that record what the dead world left behind. Mine are the eyes that hold vigil, so that the old world’s death does not return to kill the world anew. Protect me, Catchkeep, until another stands before You here, as I stand where another stood. Protect me so that I can do Your work, until my flesh fails, until my bones fail, leaving only Your stars, which light the earth forever.”

When Wasp is sent out on a routine errand to catch a young ghost for the local midwife, this works out in her favor when she encounters and strangely strong and highly-realized ghost. When she discovers that he is not one of the mindless, senseless ghosts she is used to, she’s shocked to her core. He can think. He can speak. And he needs her help.

The ghost has lost his dearest friend in the ghost world, the underworld, the unnamed purgatory which all souls must pass through. Without her, he is slowly losing his memories and his own sense of identity. He enlists Wasp to help him traverse the underworld and to keep him grounded as he does so. He uses her as a mirror to himself, using her skills as Archivist to help rather than harm. The book descends into a literal and metaphorical hell, as Wasp uncovers secrets pertaining to her own origin and confronts her personal demons. With each new revelation, the fabric of the society and reality she knows frays that much more until, suddenly, it lies in a heap of unraveled thread on the ground.

“I had to kill people to get here. I have to kill people to stay here. And I’ll be stuck here until they figure out how to kill me. The door out of this place is my grave. You want to find a ghost? Here’s ghosts.” She tore the pin from her hair, shook out the black-brown-red-blond of it, and the room filled with a carrion stink that she may or may not have been imagining. “There’s some more.” She flung her hand toward the piles of paper that were her life’s work and the life’s work of all the Archivists before her, violently shortened lives though they’d been. “And out there in the dark? They go on forever. Why don’t you go take your pick. You want my help? You tried to kill me. So you can just—”

“That,” said the ghost, unperturbed, “was an accident.”

The priest is not who she thought. She is not who she thought. The upstarts who challenge her to the death in bids to become Archivist each year are not who they thought. In a somewhat Biblical parallel, she will rise from the dead and bring them the truth – that the violence they base their life on is manufactured to ensure the comfort of those who perch at the top. Wasp will tear this down, and bring them together, for only in togetherness is there a sense of self and personhood.

Within the underworld, these personal connections define everything. It’s impossible to travel from one location to another without being able to form a bridge of memory and connection with each location. The metaphorical becomes substantial and real here, and as memories fade with distance and lack of contact… it becomes harder to reconnect. Although Wasp is able to use her Archivist tools to resurrect some of the memories buried deepest in the ghost to reconstruct his past and bring him closer to his friend, this takes a toll on her. The line that connects her to the physical world becomes thinner and thinner as she binds herself closer and closer to the underworld.

It stood. “We’re going to find her. And when we do, if she wants me to walk away, I’ll walk away. But first I need to talk to her. One last time.” Of course you do, Wasp thought. You’re a ghost. You need answers. You need closure. You need them like the living need air to breathe. You think it’s just you, but from what I’ve seen, most of us die without getting either. And maybe that’s all a ghost is, in the end. Regret, grown legs, gone walking.

Although they are incredibly different in tone, prose, and structure, the book that came to mind most while I read Archivist Wasp was Among Others by Jo Walton. The themes of connection and the need for a community, a karass, had a similar feel. Where Among Others focuses on the slow and quiet aspects of connection, Archivist Wasp pulls us into conflict and explores how parallel goals and missions can bring people together. They’re certainly aimed at very different audiences and tastes, but tell an oddly similar story at the end of the day.

One of the things I liked best about Archivist Wasp, unlike Among Others, was that it avoided romance altogether. It would have been very, very easy to turn this into a love triangle between Wasp, the ghost, and the ghost’s friend. Instead, it’s a wonderful example of aromantic asexual representation that’s focused on friendship between men and women. It’s a parable about how dividing ourselves from one another hurts us and makes us lesser than we were before, and about how coming together in friendship and interconnectedness makes us more ourselves. It’s strange, and good, and odd, and oddly kind in the way it transforms two victims of brutal societies and origins into one unified team. Highly recommended to fans of the odd and offbeat.

Although this book has a sequel, titled Latchkey, Archivist Wasp can be read as a stand-alone novel.