By the shore of the corrupted sea, in the shadow of the coal-black tower, she forsook the Nameless One. May the abyss consume the breaker of promises! May the maggots eat the flesh of her vessel! May her name be forgotten utterly!

As quarantine continues to go on and on, I’ve found it more and more difficult to focus in and simply read. In The Before Times™, reading was a part of my routine. I read on the subway to work in the morning. I read in the coffee shop I used to take my lunch at. I read on the subway coming home. I went to bed every night between 10-10:30 PM, and I’d always read a half hour or so cozied up in the covers.

Reading was the glue that filled in the gaps in my life. It was a resin I poured over an uneven surface, creating a sleek, smooth finish. Now, however, the surface of my life is already flattened… but rather than being polished to a gloss, it’s a stagnant, acrid stillness. There are no gaps for reading to fill in. My life no longer has any rhythm or change to it at all. It’s hard.

Fortunately, The Unspoken Name was fundamentally an incredibly comforting book. Although it was consistently difficult to sit down and focus due to the current situation, when I was able to do so, I really, really enjoyed it. Larkwood hearkens back to the early eras of epic fantasy, bringing the best of what I loved as a child forward into a modern, fresh new book.

The first portion of the book had me fooled into thinking this would be a standard epic fantasy adventure. It stands on its own and sets the stage for the main plot; in fact, it easily could have been a full book its own had Larkwood chosen to expand it out. Instead, we’re treated to what amounts to a prequel novella. If you find yourself wandering away from the novel in the first quarter due to the pacing, I highly encourage you to continue forward if you find Csorwe even slightly compelling as a protagonist.

Csorwe has a standard fantasy origin. She is the Chosen Bride of the Unspoken One, a nameless god of prophecy and death. She is the conduit through which it speaks, at great cost to herself. On her 14th birthday, she is meant to go to the Unspoken One’s lair and meet whatever fate he has in store for her. Enter Sethennai – a scholar who is seeking a prophecy about where he might find a powerful relic. When he learns of her fate, he spirits her away as his protegee.

Much like a baby duckling, Csorwe imprints on her new mentor. In her eyes,  he can do no wrong. He saved her life – she knows that the fate The Unspoken One had for her was nothing she would have liked. His approval is everything to her, and she feels that her debt can never be repaid. From the reader’s perspective, however, Sethennai is not nearly so good and golden. It quickly becomes apparent that he is selfish, manipulative, and possibly a little psychopathic. To him, others are merely tools to be used to prop up his own power. Csorwe is not a person to him. She is a pawn. Larkwood has flipped the “wise old mentor” figure trope on its head, despite the main character herself viewing him as the classical version.

“They’ll know we’re coming,” said Csorwe. She gave the blade of her sword one last wipe with the oiled cloth. “Since I—since Akaro won’t have come back. The soldiers will be looking out for you.”

“I could do it,” said Csorwe. She hadn’t realised until that moment what Sethennai was getting at. She replaced her sword in its scabbard, trying not to let the sparks of apprehension and excitement show in her face. “Even if they know you have an assistant,” she said, giving up on disguising her eagerness. “I could be anyone. People don’t notice me. I could do it.” She worried at times that Sethennai might think she’d forgotten what she owed him. He never mentioned it, but she owed him her life, and the obligation gnawed on her like a worm in an apple. This was something she could do for him on her own.

Sethennai smiled. “Yes. You could.”

As we get into the main meat of the book, a key piece of growth for Csorwe lies in learning that she does exist as an independent person outside of Sethennai’s plans. When she meets a young necromancer named Shuthmili and finds herself on a new quest to save her life (mirroring Sethennai’s actions at the start of the book), Csorwe discovers that she has her own wants and desires. Although they’re still looking for Sethennai’s artifact together in a bid to regain his favor, his approval slowly becomes secondary to Shuthmili’s.

To explain how much I adored the f/f aspects of this book, a few screenshots of me screaming about it to friends on Discord:

And then Shuthmili took Csorwe’s hand in hers. Csorwe could feel the warmth of her skin even through the gloves. She squeezed Shuthmili’s hand lightly and released it. They went on in a curious silence. Without looking, Csorwe was very aware of Shuthmili’s presence beside her: each footstep, the fluttering of her skirts in the wind, the way she chewed her lip when she was thinking . . . she wondered, for the first time, whether Shuthmili was thinking the same thing about her. It made her self-conscious, but not uncomfortably so, just very aware of all her limbs and the startling possibility that there was something to admire about them.

Which, really, is all you need to know. There is so much wonderful slow burn gay pining, y’all. And I’m here for it. I desperately need more f/f epic fantasy like this. Please, I beg you. Give it to me. Immediately.

All in all, highly, highly recommended as a fun, action-packed f/f quarantine read. It will bring back all the feelings you had a young teen encountering your very first epic fantasy along with a wonderful fresh burst of love for the new voices and ideas present in the genre. 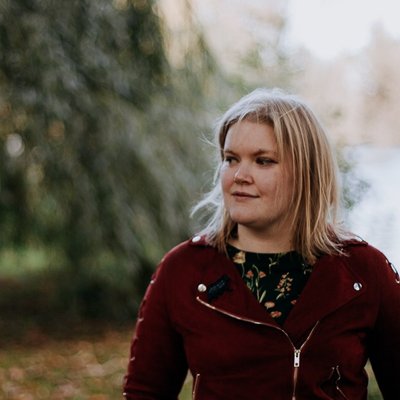 A. K. Larkwood studied English at St John’s College, Cambridge. Since then, she has worked in higher education & media relations, and is now studying law. She lives in Oxford, England, with her wife and a cat. Her debut novel, The Unspoken Name, will be published by Tor in 2020.

3 thoughts on “The Unspoken Name by A. K. Larkwood”