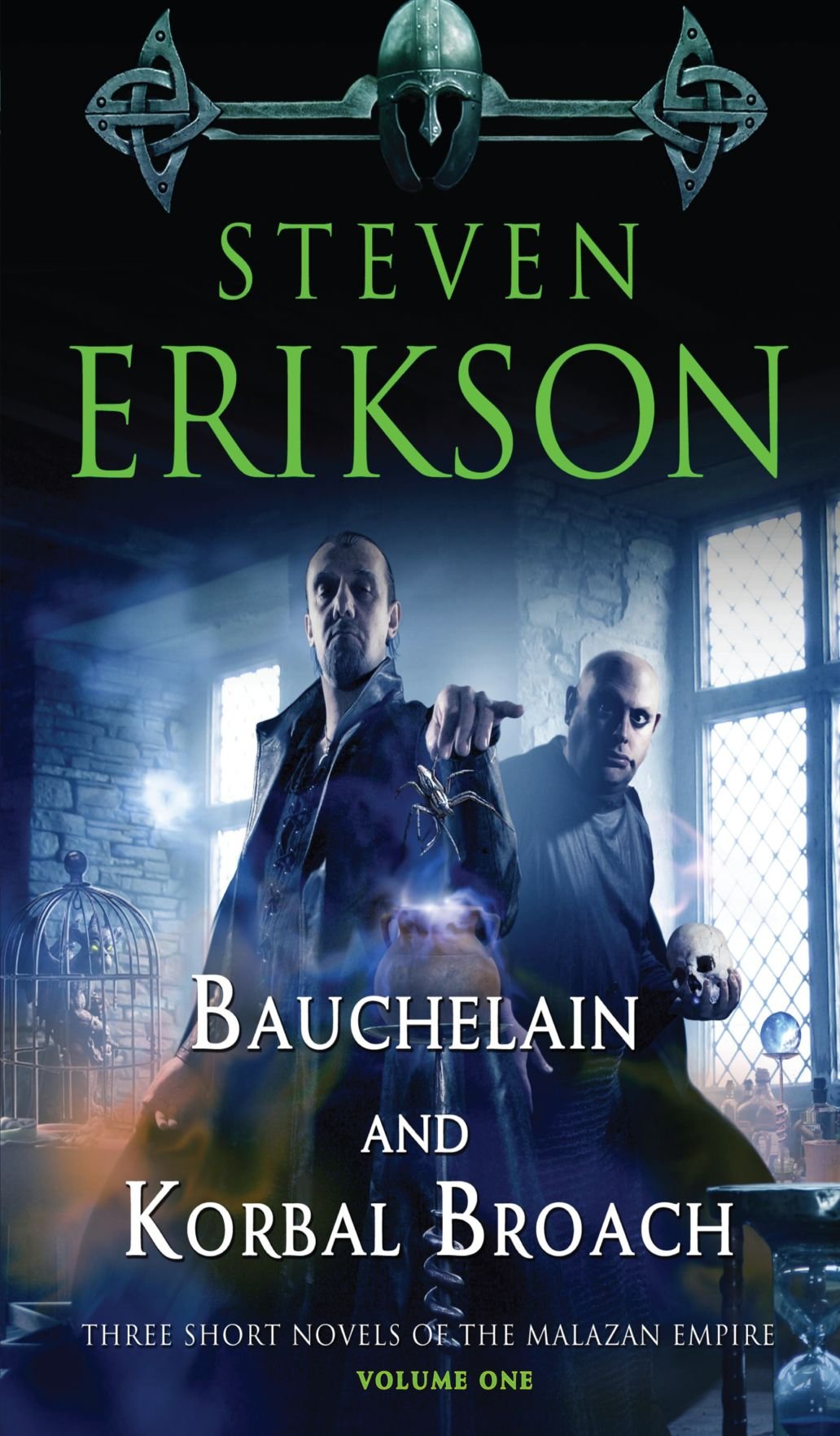 “Such is the vastness of his genius that he can outwit even himself.”
― Steven Erikson, Deadhouse Gates

Hi friends! It is 11PM and week four (five? six? time is meaningless) of quarantine here in NYC. I’ve had a little rum tonight, and figured that now, today, was the time to finish up this review. I’ve only left my apartment once in the past god knows how many weeks!

Anyway, I am here to talk about the greatest book series ever written, Malazan, Books of the Fallen by Erik Stevenson. Now, I have never read these books, but as a long-time member of the r/fantasy subreddit, I have read many, many threads where these books were talked about and recommended. Therefore, I feel more than qualified to review these novels. You can trust me on this. For those new to the series, I’ve included a quick audio clip to assist you with the correct way to pronounce Malazan – many people struggle a bit with this, as well as with other pronunciations within the books. Please see below.

Malazan is a book series for everyone. However, the first book, Gardens of the Moon, is often a challenge for readers who are new to Malazan. Common complaints include a slow pace, large cast, and insufficient exposition. Gardens of the Moon drops you right into the story with very little background, so it can be a bit intimidating. However, if you’re a fan of large-scale world-building, it’s worth it to push through this novel. The second book is where you’ll truly find out whether or not Malazan is your cup of tea.

Steven Erickson writes epic fantasy for fans of broad, sweeping worlds. In general, you’ll find a lot to love if you’re the sort who enjoys discovering a universe bit by bit rather than having it handed to you. The plot and pacing can be a bit of a slog, so if you didn’t care for how G.R.R Martin spent ages describing the food and the specific dress some lady or other was wearing and wanted to get back to the action… possibly look elsewhere. Although the action scenes in Malazan are excellent, that doesn’t erase the lengthy journey to get to each one as a reader. That said! Once you’ve read the first three books, you should be so invested that it won’t even matter. Just let the Stockholm syndrome kick in and you’ll be good.

I am reasonably confident without looking it up that Deadhouse Gates is the second of the Malazan novels. This book is great for fans of fantasy romance, as several characters get into relationships in this book. If you’re more of a fan of grimdark, well, this book ALSO has a lot of characters die during it.  The overall tone, of course, is primarily hopeful in nature. The second book really is where the story picks up. If you’ve read this one and still aren’t a fan, Malazan may not be the right series for you.

In the third installment of Malazan, which is titled A Memory of Ice and Fire (G.R.R Martin collab? uncertain), things start to get a little more heated. There is even some romance in this book, with the character WhiskeyJackDaniels falling in love with Carsa. Carsa is extremely manly, so I don’t blame her one bit – who WOULDN’T fall for those muscles and that macho mystique, you know? I think this could be categorized as paranormal romance for all you urban fantasy fans out there (I see you!), as it’s my understanding that her lover is of a different species. There are lots of fights, violence, and plenty of war. These serve to enhance the romance. If you’ve read this far into the series and enjoyed what you’ve read, that’s fantastic: you’ve officially earned the title of Malafan. You’re only going to love this series more from this point on.

Book four, Caravan of the Damned, is just what it sounds like. Karsa plans to burn a crusade across the north. Karsa is a barbarian, through and through… and it’s unclear just what future he may be leading his people to. This portion is largely self contained, and the second half is more traditional with a variety of viewpoints. I am not sure if WhiskeyJackDaniels comes back in this book, but I hope she does since quite frankly she seems like the best character based on the research I’ve done.

That said, if WhiskeyJackDaniels doesn’t come back, it’s probably going to be because she was killed off so as to deepen Carsa’s character. Carsa, being as manly as he is, needs a tragic backstory in order for his tragic hero vibe to work out. As we all know, the best way to do this is for their love interest to die (tragically) and set off a vengeance arc. Examples of books that do this very well include Red Rising by Pierce Brown, The Dresden Files by Jim Butcher, and The Black Leviathan by Bernd Puppies. These use this incredibly effectively to highlight the differences between men and women, showing how females must be protected and really are why we’re all fighting for a revolution.

“Death’s precipice, whether first glimpsed from afar or discovered with the next step, was ever a surprise. A promise of the sudden cessation of questions, yet there were no answers waiting beyond. Cessation would have to be enough. And so it must be for every mortal. Even as we hunger for resolution. Or, even more delusional: redemption.”
― Steven Erikson, House of Chains

I literally don’t know anything about the fifth book, Midnight Tides. Same with book six, The Bonehunters. Maybe it’s about a heist of some sort? Necromancers? WHO KNOWS. Book seven, of course, is the most famous of the lot. There’s tragedy. More war. More killing. Romance! More characters than you can keep track of. I’ve always have a real soft spot for Sulty. The way her name is a play on both salty and sultry is something I found to be particularly clever, given her role as a serving woman at the Phoenix Inn in Darujhistan. It’s a difficult balance to keep – she can’t let her bitterness at her lot in life overtake her, and yet she also must play her part lest she lose her job or alienate patrons of the inn.

The pinnacle of the series is, of course, the tenth and final* book: The Crippled God. This is all about K’rul, AKA Cruel. Gosh, again with the AMAZING puns, Steven – consistently impressed by this throughout the series! K’rul is one of the best representation of disability I’ve seen in fantasy, hand’s down. Not only does he struggle with mental illness and narcissistic tendencies, but he is also wheelchair-ridden. The way he must navigate the harsh and cruel hellscapes of Malazan is nothing short of inspiring.

*final of the first ten book series. There are more after this, don’t worry!!

Honestly, though, I think that “inspiring” is really how I’d describe the series as a whole. It’s the sort of series that makes you sit and think about how you truly, truly could do anything with your life. Even read an entire twenty+ book series. What better way could you possibly spend quarantine?

Born in Winnipeg, IAN CAMERON ESSLEMONT has studied and worked as an archaeologist, travelled extensively in South East Asia and lived in Thailand and Japan for several years. He now lives in Fairbanks, Alaska, with his wife and children. He has a creative writing degree and his novels Night of Knives, Return of the Crimson Guard, Stonewielder, Orb Sceptre Throne, Blood and Bone and Assail are all set in the fantasy world of Malaz that he co-created with Steven Erikson. His latest novel, Dancer’s Lament, begins an exciting new series that is set in the same extraordinarily imagined world.

6 thoughts on “The Ultimate Guide to Malazan, Books of the Fallen by Erik Stevenson and Ian Castlemont”