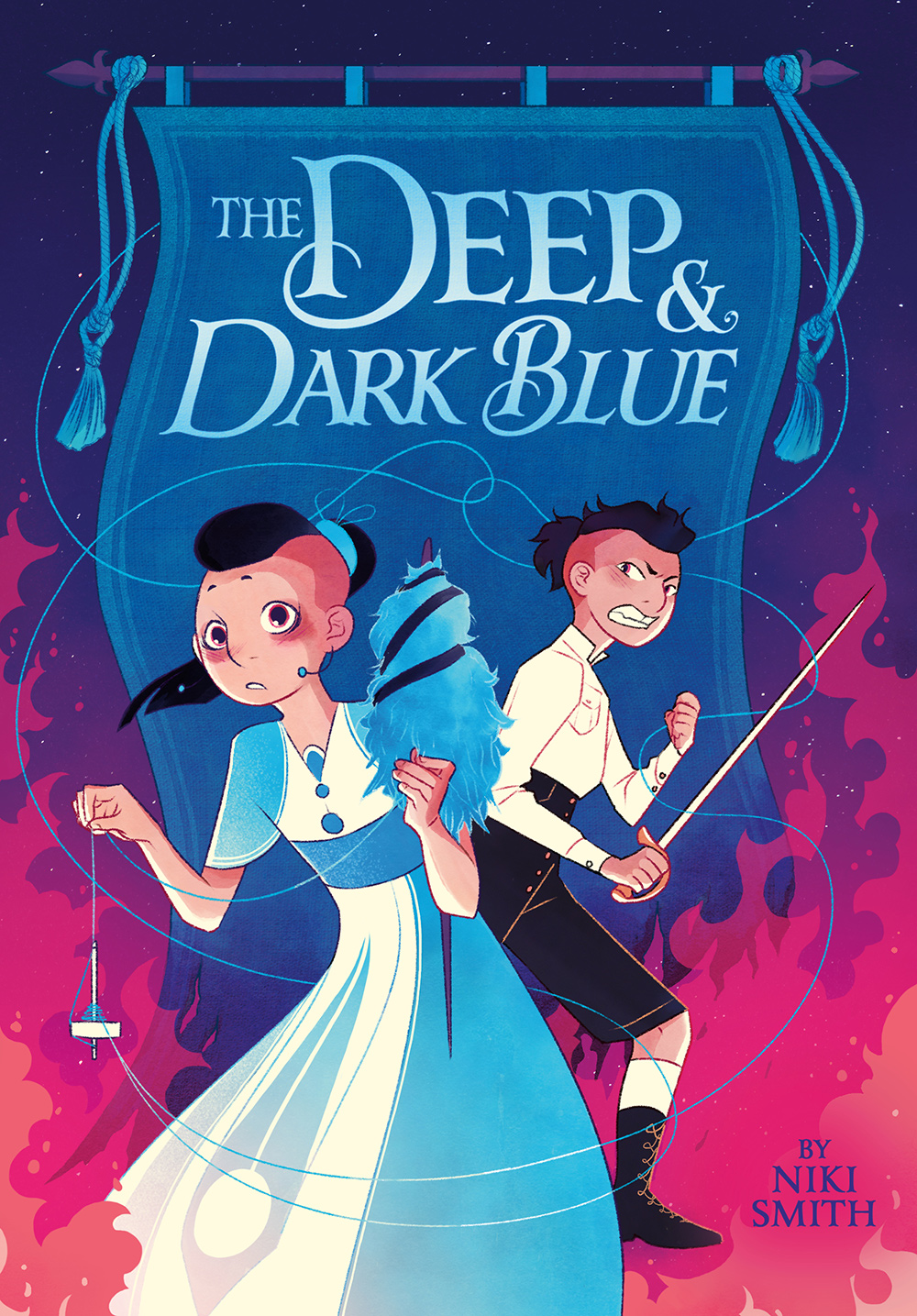 The spinners, the weavers, the dyers, the healers.

We spin the threads that bind the world… we spin blue.

We are the Communion of Blue.

It’s fairly rare that I read any middle grade books, but I saw Niki’s art for The Deep & Dark Blue and immediately fell in love. I knew at once that I had to check this book out. The bold colours and character designs work for me. When I heard it described as “Tamora Pierce, except if Alanna/Alan got to actually be trans,” that was all I needed to know. I headed off and snagged it from Bookshop. And honestly? It completely lived up to all my hopes and dreams.

First, the art. The art is stunning. Niki uses a palette of bright, saturated blues, reds, and pinks throughout the novel to great effect. Panels are bold with large swathes of color containing only minimal shading within each block. Her art style is eye-catching and creates a sense that the world is bigger, broader, and more lush than the dialogue and narration can cover on their own.

I have a real soft spot for magic based on weaving and spinning. As Tor.com recently discussed in their blog post, In Defense of Needlework, it’s common for young girls in SFF to feel empowered by disliking feminine activities such as sewing. I think that gets just a bit old, myself, and clearly Niki is in firm agreement with me. As in The Four Profound Weaves by R. B. Lemberg (another AMAZING story featuring trans characters!), the art of working cloth has been elevated from a mundane activity that’s too-often disparaged by powerful characters into a source of power and strength in and of itself. The act of creation becomes a source of magic.

When the sisters in the Communion of Blue spin their wool, it’s not just thread that they create. Instead, it allows them to control the elements – wind, fire, and water. They are tapping in to the world itself and changing the very fabric of reality with their magic. Not all the sisters are able to spin Blue, however; others fill different roles within the Communion. Some learn martial arts, some farm the fields, and some are chosen to become healers. Each art has its own values, even if Hawke, one of our two main characters, is a bit slow to realize it.

Grayson and Hawke are twin brothers, scions of House Sunderlay. Neither of the pair ever expected to have much to do with the Communion of Blue beyond watching a few of their ceremonies from afar, but their life is thrown into turmoil when their sister stages a coup on their house, killing their father and his heir. They flee, disguising themselves as young girls amongst the Communion’s new initiates.

For Grayson, however, being a girl isn’t just a disguise. For once in her life, she can be the person she’s always wanted to be: Grayce, a sister in the Communion of Blue. She’s always been Grayce, deep underneath, but only now is she in a position to embrace herself and her own life. She’s admired the sisters from afar for years, pining away as they perform their magics in the distance. Hawke, however, chafes beneath his dresses and wants his old life back.

Hawke is admitted into the ranks of the Guardians, initially ecstatic that he’ll be learning to fight. His hopes are quickly dashed, however, when he learns that the sisters rely on balance and speed, utilizing unarmed combat techniques. He’s trained with a sword his entire life; what possible use could he have for punches and kicks? Later, however, he’ll learn exactly what sort of advantage they can bring to him. Without these skills, his quest to bring justice to his house would never have succeeded. He’s been raised as a boy and will become a man, but Niki takes this opportunity to once again highlight the strength of women and femininity.

The acceptance and love both Hawke and the sisterhood show towards Grayce is heartwarming and beautiful. It made me so happy to see the support Grayce receives at every turn. She’s worried, and rightly so; coming out and telling people you’re close to that you’ve hidden something from them is incredibly frightening! The fear of rejection is very, very real. Hawke’s reaction made me adore him: he was horrified. Horrified that he hadn’t realized she was Grayce and not Grayson, and oh-so-embarrassed that he’d been thinking of her as Grayson this whole time when she clearly, clearly was not. Reading that scene, my whole reaction can be summed up as “omg my babies I love them they are so good and wholesome and I love them??? omg sweet babies” (don’t judge me). It warmed my heart. It’s the kind of content I desperately need more of during this whole pandemic and quarantine situation. Cinnamon rolls, the both of them.

Now, admittedly, it is important to go in with expectations reasonable for a middle grade book. Since this is aimed at a younger audience, it’s focused first and foremost on being clear and straight to the point. There aren’t intricate plot lines that intersect and interweave, etc. It’s much simpler than Alanna’s adventures in Tortall were, in part because of the age and in part because of the medium. That said, there is still a ton to enjoy as an adult! As said earlier, my only gripe is that I really do wish there’d been a little bit more. Although it makes sense that there isn’t given its audience focus, I’d give a lot for an in-depth look at the Communion’s internal politics, more information on how the magic works, and a better understanding of its capabilities and limits. I love the world, and I do wish that I had an opportunity to dig into it a bit deeper.

I’d highly recommend this graphic novel to anyone who’s in the mood for a quick, feel-good story about good overcoming evil. If you love beautiful art, trans representation, and highly developed characters, this is the book for you. Niki recently did an AMA with us over at r/Fantasy, which is another great resource to learn more about The Deep & Dark Blue along with its author. Loved it!

Niki Smith is an artist, writer, and lover of fine comics (and some pretty trashy ones too). I grew up in Kansas and now call Germany home, and I’m dedicated to filling the world with queer and diverse stories! My debut graphic novel, Crossplay, is a Lambda Literary Award nominee.

I’m a US author but I moved to Germany with my wife a few years ago; I was supposed to spend April and May back in the States doing a tour of comic conventions and book festivals, but, well, none of that’s happening now! I’ve also drawn serious nonfiction comics for The Nib and silly smutty (and totally educational) stuff for Oh Joy, Sex Toy.