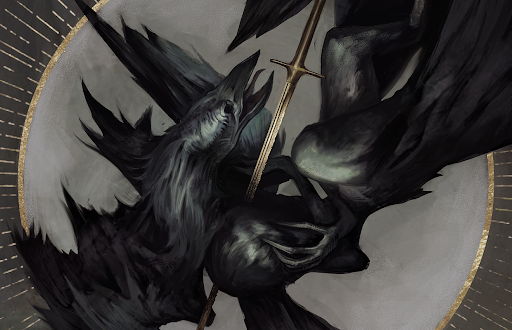 This Is How by Marie Brennan

Welcome to Short Fiction Friday! Every Friday, Black Forest Basilisks will be shining a spotlight on a new short story, novelette, or flash fic in addition to our regular posts. These stories will usually be available for free online, but occasionally stories from published anthologies will also be featured.

This story is available online for free at: Strange Horizons. Click through to read!

This is how a valravn is made:

A child dies. Lost in the woods, he curls up at the base of an ancient oak, and never rises again. Or she falters in the snow, lying down for a moment by the side of the road, just a moment to rest her eyes. Or, starving and alone, he weeps for someone to help him—but no one does.

A raven comes. Pecking, tearing, red blood on a black beak. Not eyes, as some tales would have it, but the cold red blood of the child’s heart, chilled and stopped by death.

A child falls. A raven feeds. A valravn flies away.

Previously, I’d only ever read Marie Brennan’s Lady Trent novels, beginning with A Natural History of Dragons. While I thoroughly enjoyed them, they did somewhat lack that particular fantastical mystique that I love best about the SFF genre. Brennan, however, has this in spades in her short story This Is How.

This Is How is a contemplation on the fall from grace, the tragedies of untimely death, the horror of abuse, and the road to redemption. Valravns are created through a tragedy that is not in any way their fault. A child dies because others did not care for them. The raven does as ravens do – it feeds. Neither of these two parties are responsible for this. They are innocents. Yet, a monster is nevertheless created by the lack of care on the part of others. This mirrors the cycles of abuse that we see in families; although children aren’t at fault because their parents abused them, a new monster may well be created as the child continues the cycle of abuse once they become adults as well. The abused become abusers. Where valravns are concerned, the killed become the killers.

This is how a valravn breaks:

In horror, in anguish, in grief.

He gathers up the scattered pieces from the stained carpet of daisies, as if he can stitch them back together again. But the force that transformed him gave him armor and a sword, not a needle and thread. He can kill, but he cannot heal.

Of course, we all have the power to break that cycle. Usually, that doesn’t occur until we hit rock bottom. Valravns, too, must live with the horror of their existence… which begins to weigh on them more and more until they break. Eventually, they may be able to turn things around, to become people once again. That road, however, is long and hard.

Not everyone makes it. Those that do, though, are reborn.

Past featured short stories can be viewed here.

Have you read this story? What did you think? Do you have any questions about it?

One thought on “This Is How by Marie Brennan”